In 2007, Joshua Arifin made his new musical works for his new band, Notturno Band as a Double Bass Player, Composer & Arranger. After releasing their first album, '4 .25 AM ', Notturno called back with a single, Jiro - It takes 3 Steps Forward Him, featuring a young tenor saxophonist, Yudha Gautama. This song was taken as a soundtrack for a movie,"Pintu Terlarang”. In 2009, Joshua Arifin and Notturno again, made a music soundtrack for "Rumah Dara." With Notturno, Joshua Arifin performs in many jazz festivals and events.

In 2008-2009, Joshua Arifin also active playing with big bands and orchestras. Joshua Arifin performed with the drama musical “Malin Kundang” ensemble and he composed 3 songs for it. In 2009, he performed with Jakarta Broadway School at Java Jazz Festival. He also played with The Daya Big Band and The Daya Orchestra. 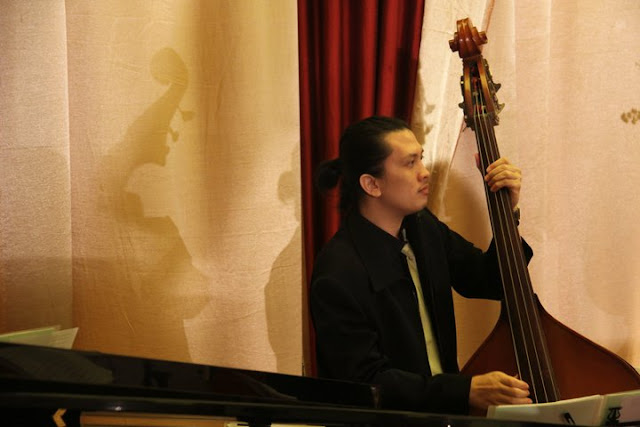 Jova Musique is a music entertainment company which was formally established in the year 2009.

We provides music entertainment with many kinds of interesting music concept. With many professional musicians playing many kind of music instruments, we served musics with the best quality. Jazz, Pop, Classic and any kind of other genres, we can packed all of them to be a beautiful and exciting music.

Based on our desire which is to always serve only the best, we provides many kinds of music concepts like acoustic music, jazz combo, strings quartet, chamber music, bigband, mini orchestra, full orchestra, and many more.

MISSION
Jova Musique always give the best for our clients. We want to fulfil our clients’ wishes which appropriate with event’s concept. With our professional working system and well preparation, we will build an atmosphere that will give you joy, comforts, and happiness. Serving the best will always be a part of our mission.